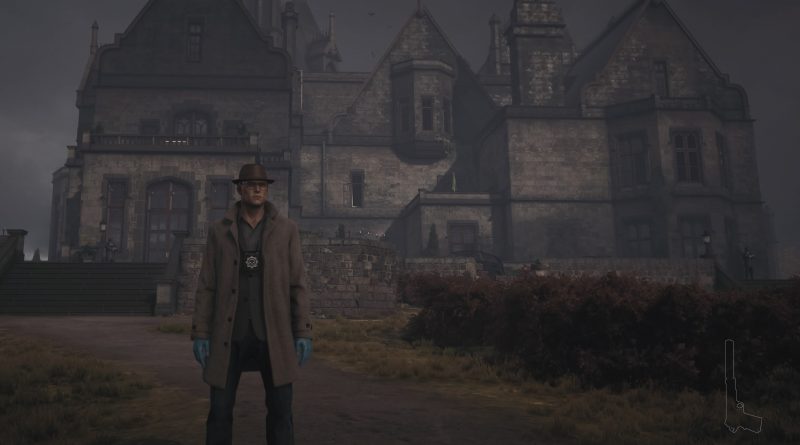 Means, Motive, And Opportunity : To do this plot, walk quietly to the mansion, stepping over the wall and across the stream. Enter through the open window on the right. Wait for the detective in the hallway behind some suitcases. Control him when he comes towards you and takes his clothes off. Go see the butler to find out about the crime scene. Once you have the clues to the room, return to the Butler for a list of the locations and suspects in the investigation. Search all rooms by interacting with the highlighted objects in instinct mode. Remember to take pictures of the items marked on your map. End it, interrogate all the suspects. You can then return your verdict to the butler and have an interview with Alexa Carlisle. You can get the file on Le Constant as a reward.
Her Final Resting Place : Go to the cemetery outside. Destroy the bird nests in the trees, using a silencer to bring the target to his grave. You can choose to take on the role of the undertaker or not. Push the target into their own grave to complete the plot.
A Day To Remember : Find a fuse outside the mansion (it’s next to two guards.). Join the fountain, take the screwdriver and the wrench. Insert the fuse into the fuse box near the fountain. Destroy the electrical outlet on the ground of the fountain with the screwdriver. Break the water pipe of the fountain with the wrench. Wait until the target comes and takes the family photo to complete the plot.

Versatile assassin : Complete the versatile challenges in “Deaths in the family”
Someone Could Hurt Themselves : Kill a target in an accident. Follow the plot « A Day to Remember » to accomplish this assassination to kill the target by pushing them into their grave.
Hold my hair : Use an emetic poison on one of the target’s glasses to get him down the toilet and drown him.
Straight Shot : Use your pistol to kill the target with a headshot.
Piano man : Equip Agent 47 with his piano wire in preparation for the mission. Use the piano wire to kill the target.
Tasteless, Traceless : Eliminate the target by poisoning it. You can use the poison created in the greenhouse, or just wait for one of his children to murder him on their own.
Another Death in the Family : Repair the poison machine in the greenhouse. Emma will create a poison to kill the target herself.
One for the Ages : Shock the target during the « A Day to Remember » storyline
I Find This Amoosing : Kill the target with the chandelier. You can do this during the conclusion of the « Means, Motive, and Opportunity » storyline. Shoot the chandelier to drop it on the target.
Grave Mistake : Follow the plot « His Last Home ».
Keep Calm and Aim : Bring the target to the graveyard via the “Last Rest” storyline. Go to the roof using the maintenance balcony shortcut. Eliminate the target with a sniper rifle from the roof of the mansion. You must reach mastery level 20 to get the sniper rifle.
Sweet Dreams : Follow the target to their private room (behind a door in their office) and eliminate them inside.

The Bridge on the Thornbridge River : Escape Thornbridge Mansion over the River Bridge outside the Mansion.
Magic is Real : On the staircase outside the mansion is a unicorn. Simply remove its horn.
Thornbridge Manor Keys : Collect the five keys to the mansion, from the body of Emma, ​​Gregory, Rebecca, the butler. You find the last key going everywhere in the butler’s office.
Shortcut – Balcony Ladder : Unlock Zachary’s Balcony Ladder Shortcut
Elementary, My Dear Diana : Control the private detective when he arrives in the mansion and disguise yourself as a detective. Follow the plot “Means, Motives and Opportunities”.
Discover Dartmoor : Explore the 22 rooms of the mansion. You will find them easily by following the plot « Means, Motives and Opportunities ».
Chameleon : Take on the appearance of the eight characters in the level (Gardener, Lawyer, Detective, Undertaker, Photographer, Housekeeper, Bodyguard, Mansion Guard).
Shortcut – Maintenance Ladder : Hang on to the railing above Alexa’s desk to reach the maintenance balcony window. Use a crowbar to unlock it.
Dogs Secrets : Use Bulldog’s cane to open the secret passage behind a dog board.
Don’t Lose Focus : Master the photographer and disguise yourself with his clothes.
Don’t Rock the Boat : Collect the key to the boat in the greenhouse and escape the mansion with the boat.
D’ya Like Dogs : Collect the bulldog cane from Emma and Grégory’s room.
Justice for a Prize : Disguise yourself as a lawyer. He’s in a room hidden behind the painting of a dog in Rebecca’s bedroom.
Let’s Go Hunting : You find the shotguns in the hallway near the staff room.
Top Gear : Take the motorcycle outside
Bring Out Your Dead : Disguise yourself as an undertaker. It is in the cemetery
Last Responder : Take the hearse key from the undertaker’s body to unlock the exit and use it.
Winning pair : Take the two tokens that are on the butler and on Rebecca
Efficient scanning : Find all the information by examining the highlighted items and taking pictures of the items marked on the map. Bulldog’s cane can be useful in unlocking secret rooms.

The Raven : Hunt the cemetery birds by shooting them with a silencer.
Poison Ivy : Repair the crafting machine in the greenhouse with a wrench. Prepare a poison with the plants present in the greenhouse.
Close to the Chest : To obtain the file on Arthur Edwards, you can receive it as a reward for the mission “Means, motive and opportunity”. You can also open the safe with the button on Alexa’s seat in her office. To find the safe code, look at each sign and look for their corresponding numbers around the room.
Voyeurism : Take a picture of the two employees flirting upstairs.
Proud Undertaker : Follow the storyline on a day to remember without taking out the undertaker.
Peeping 47 : Spy on the target through one of the holes in one of the secret rooms. The bulldog cane in Emma’s room allows you to discover secret rooms.
A Matter of Justice : Blame Emma during the Means, Motives, and Opportunities storyline (you must find all clues in her bedroom and greenhouse).
Nothing as it Seems : After activating the fuse box, the target joins his family in the living room. Spy on the meeting with your photo camera.
Elton Would be Proud : Neutralize Edward Carlisle while he plays the piano.
Mission Story – A Day To Remember : Complete the “A Day to Remember” storyline
Second-Hand News : Take the log located at the entrance to the outer mansion and knock out Gregory Carlisle with it.
Cue Balled : Take the billiard ball from the pool table and knock Patrick out with it.
Mission Story – Means, Motive And Opportunity : Complete the plot « Means, Motive and Opportunity.
A Matter of Guilt : Complete the Means, Motive, and Opportunity storyline with the Suicide Conclusion using the Old Hidden Letter. You can find her thanks to the Bulldog rod behind a bookcase above the pool hall.
Mission Story – Her Final Resting Place : Complete the plot « His Last Home. »
Don’t Kill the Messenger : Search the lawyer’s computer. It is located in a secret room behind the painting in Rebecca’s bedroom.
Ding ding ding ding : Piss off Alexa Carlisle with the mansion bell in the downstairs living room. Operate it several times.
A Matter of Loyalty : Accuse the butler during the plot « Means Reasons and Opportunities » (you must find all the clues of the butler in his office).
Say Cheese : Complete the “Memorable Memory” storyline.
A Private Moment : After having elucidated the mystery of the plot « Means, motive and opportunity ». Follow the target and take a picture of it while it is next to its brother.

[Guide] Everything is for humanity – Full Walkthrough

[Soluce] Everything is for Humanity : Solution Complète [FR]